Ham Radio in the Plow Truck

My wife recently bought a 2007 GMC 3500 Classic pickup truck that had been set up for plowing snow. It was previously owned by a local utility company who had been kind enough to leave an NMO which they had been using for their business-band radio. My wife and I both have our amateur radio licenses and I thought it would be a shame to leave the truck without at least a two-meter band transceiver since someone else had already done the hard work of installing an antenna mount. 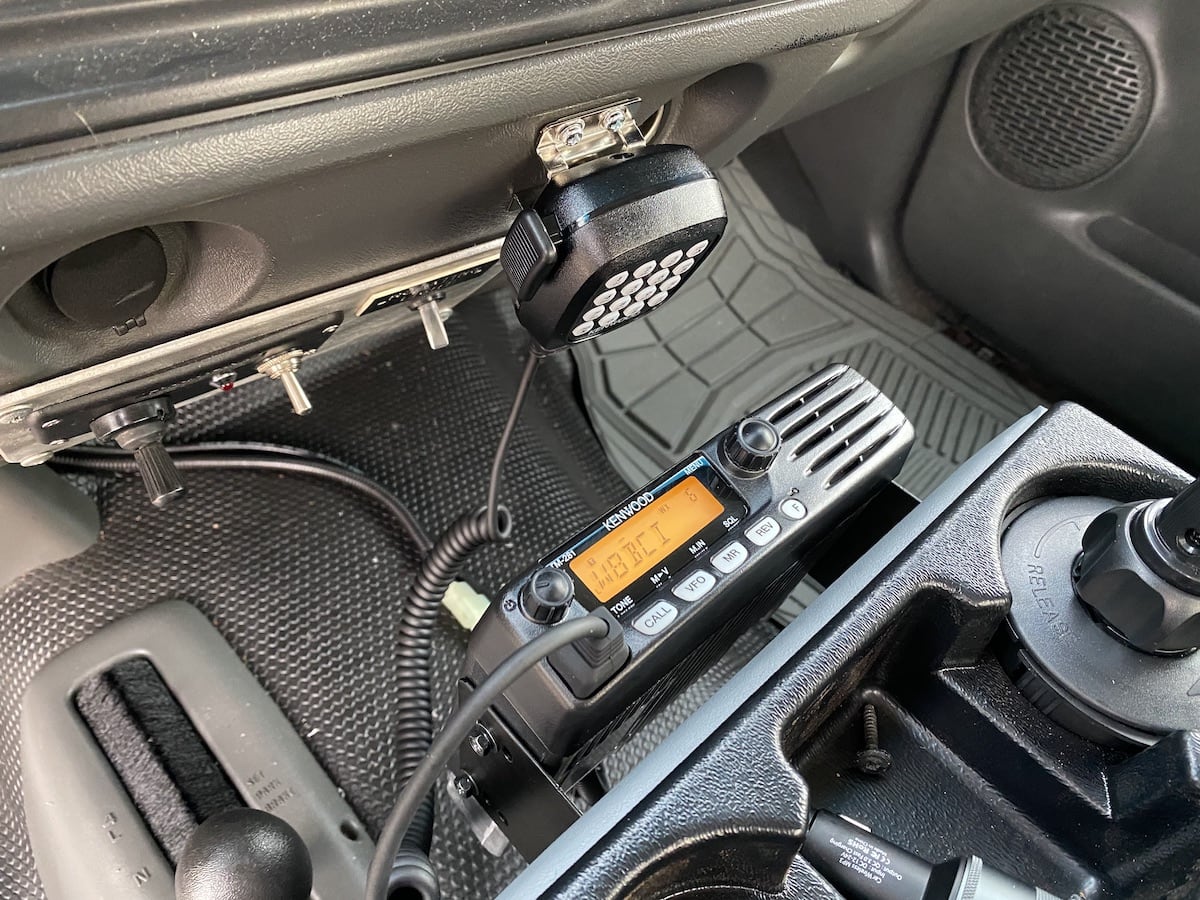 I thought it would be nice to get a radio with a front-firing speaker. I figured if I could get it at or near head level, it would be pretty easy to hear. The truck doesn't have air conditioning, so we often drive with the windows down in nice weather. Even with the windows up, it's not a quiet ride.

I had seen that some newer radios had a NOAA weather alert feature and I thought that might come in handy too.

With those features in mind, I got what I thought was a good deal on a Kenwood TM-281a two-meter amateur radio transceiver and a Larsen quarter-wave NMO antenna. I was tempted by their five-eighths wave antenna, but it would have been so tall on a truck that is already very tall. I was just sure it would thwap everything we drove under. I also picked up a recent copy of the ARRL Repeater Directory, some ring terminals for the power cable, some RG-8X coaxial cable, and some of DX Engineering's excellent crimp/solder UHF connectors. I already had some adhesive-lined shrink tubing to cover the crimp part of the UHF connectors.

I prepared the antenna by trimming the whip to the length indicated in the instructions. The whip is quite hard, so I notched it with a triangular file and broke it at the mark with two pairs of pliers. The whip had a nice thick black coating, so I removed about a half inch of it at the bottom with a wire wheel. The instructions gave the proper length and steps for re-assembly. With the new antenna set up, installation was as simple as unscrewing the old one from its mount and screwing on the new one. It probably wasn't necessary, but I used a little dialectric grease on the connection. A quick sweep with the antenna analyzer indicated that the whip could probably be shortened a little more for optimal performance, but the SWR was acceptable across the two-meter band. 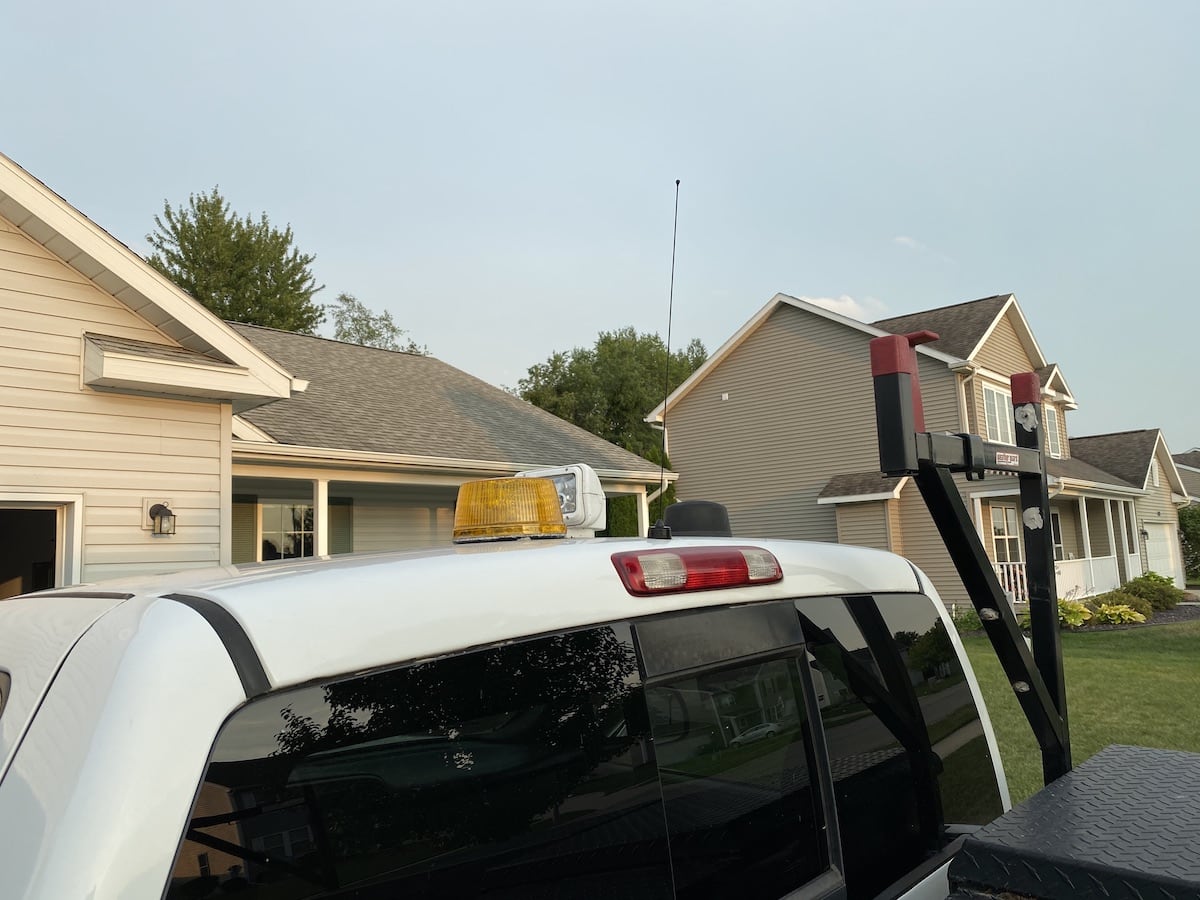 I had much of the interior trim out of the truck to clean up some of the extraneous wiring that someone had left behind when they decomissioned the truck. I found a bunch of broken glass, too. Apparently something unfortunate had happened to the rear window at some point. While poking around, I found where the coax from the NMO mount came down from the headliner. It was behind the driver's side B-pillar cover, which I thought was convenient.

The existing cable was terminated with a TNC connector, which I gather is pretty normal for business radio systems. In amateur radio we more often use UHF or perhaps BNC connectors. I removed the TNC connector and replaced it with a UHF connector. 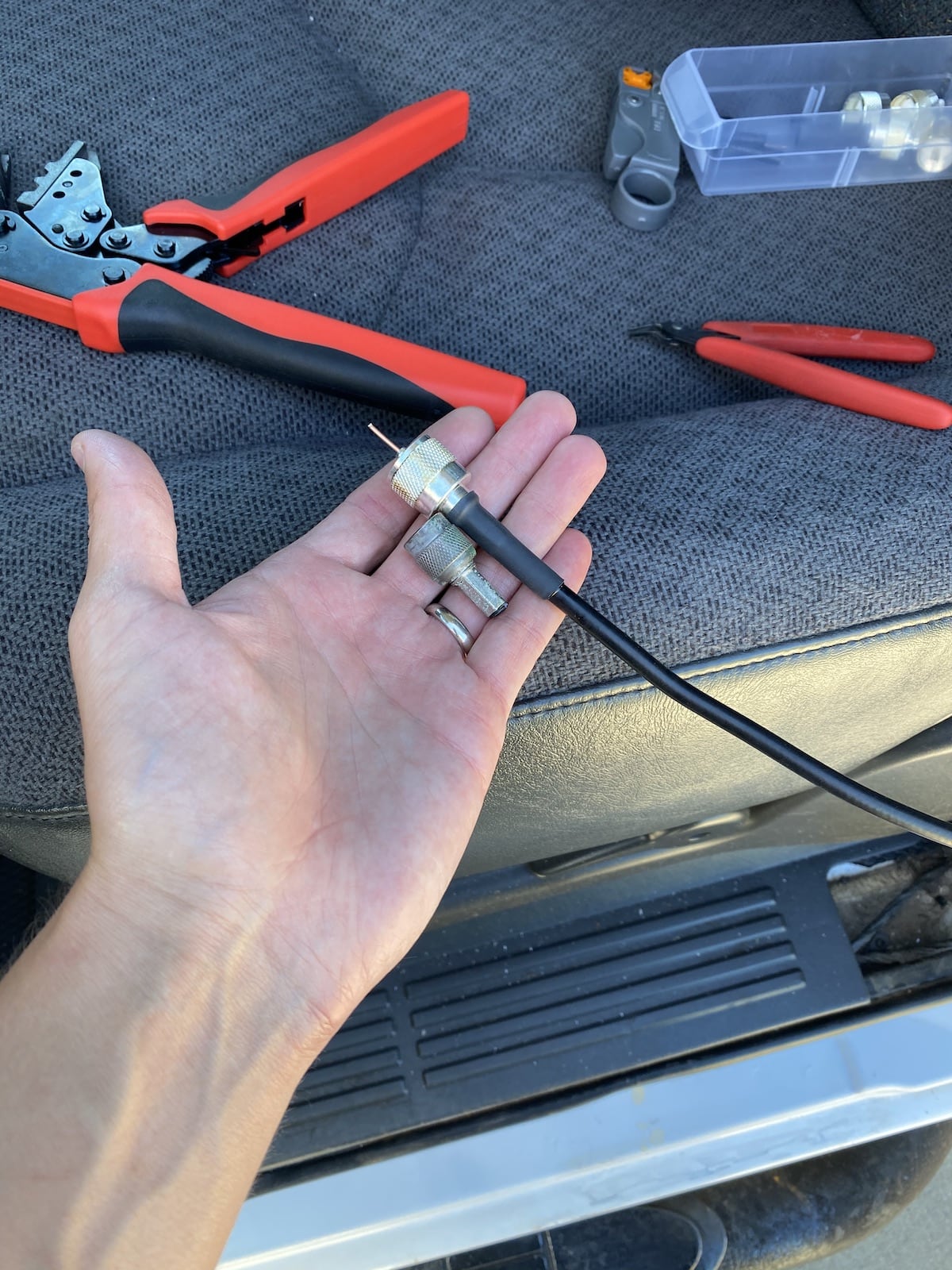 As received, the truck had no center console. We installed a nice big aftermarket console and the front of it looked perfect for mounting a radio. I ran some additional RG-8X coaxial cable from there forward along the transmission hump to a little strut I followed up to the bottom edge of the dash. From there I followed some wiring that had been added for the upgraded lighting along the bottom edge of the dash over toward the fuse compartment. There I switched to follow some factory wiring down behind the parking brake and under the door sill and back to behind the B-pillar cover. I used a UHF coupler to connect the two cable sections. Since it was near the floor, I packed the coupler with dielectric grease to prevent moisture ingress. I also wrapped the connection in vinyl tape to help keep it from rattling apart. 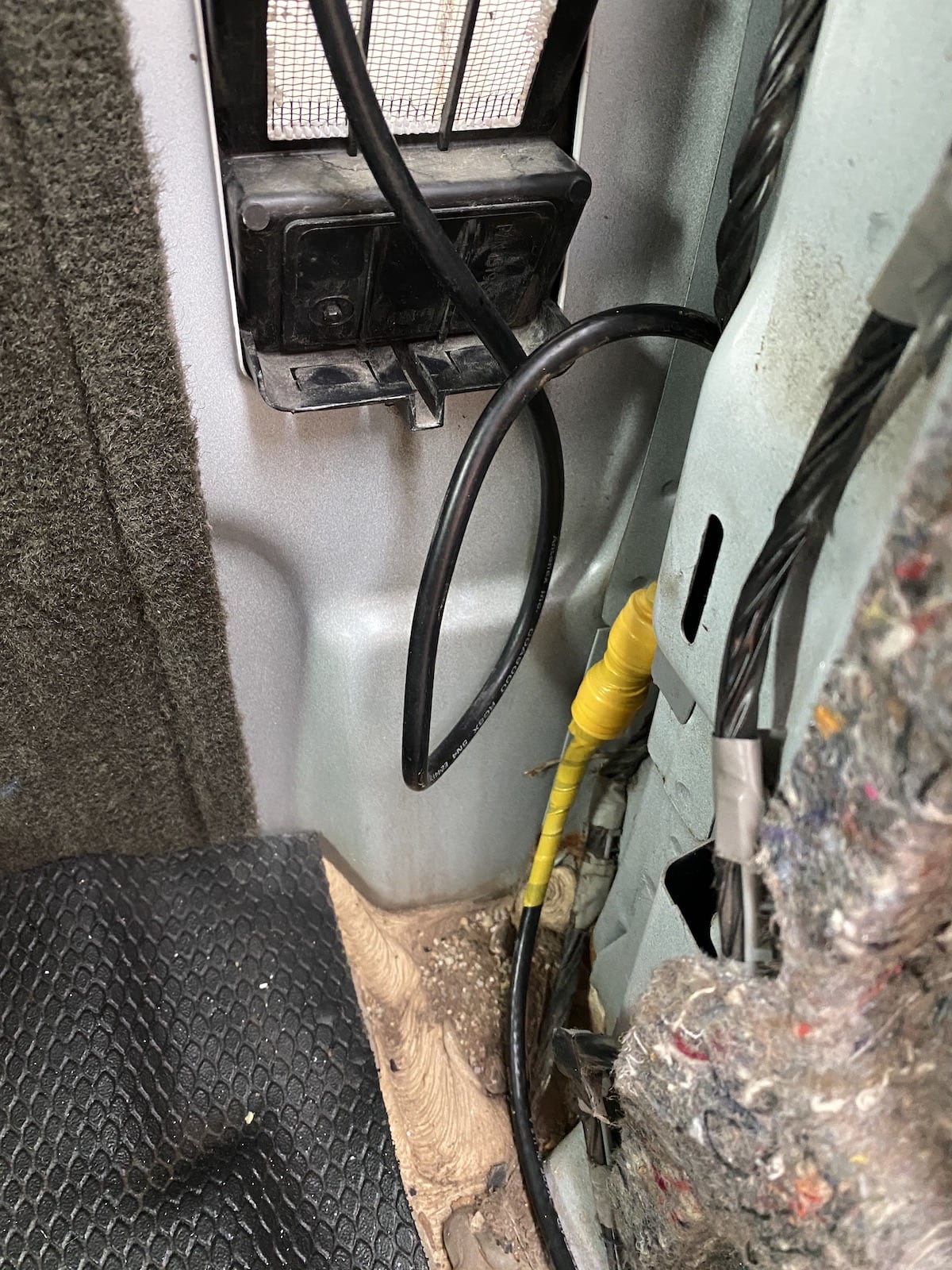 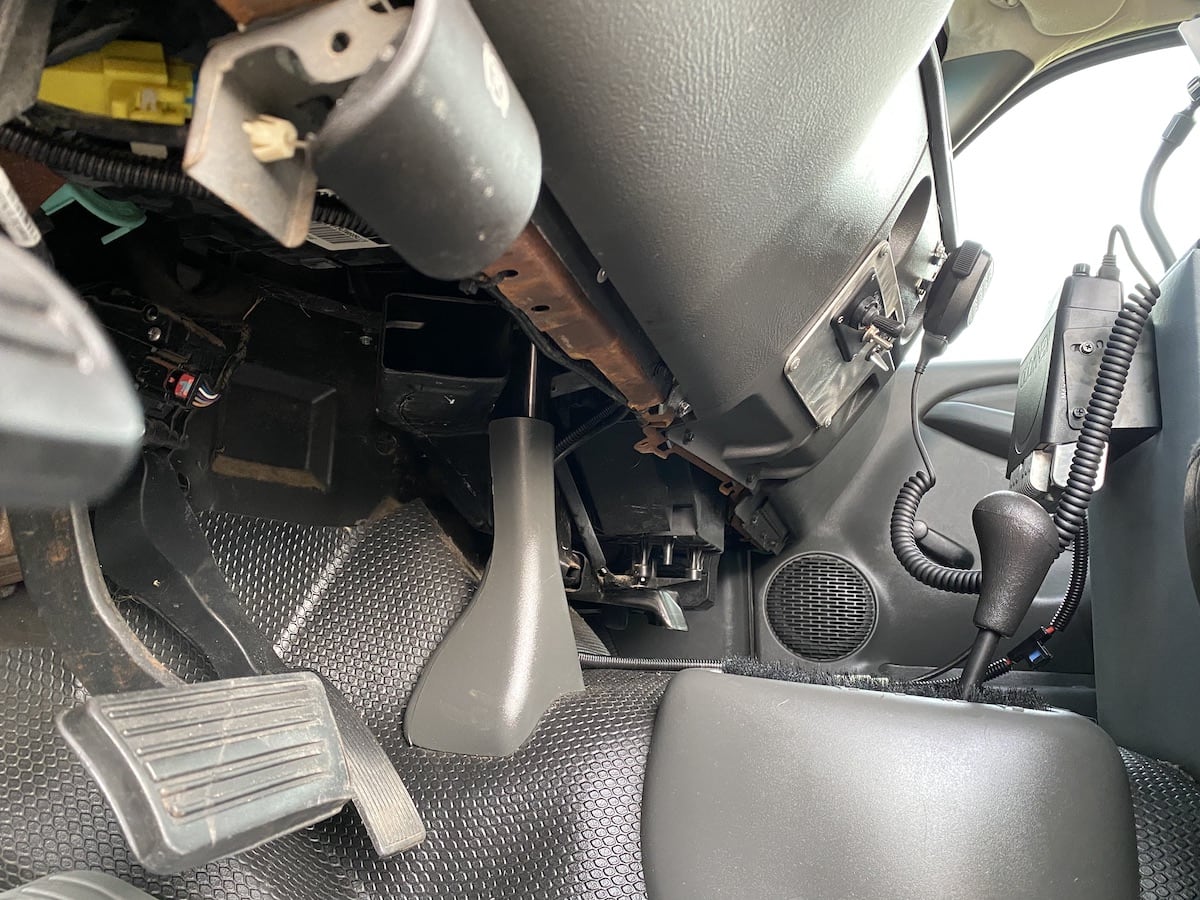 For the power cable, I followed the coax over the transmission hump and across the bottom of the dash toward the fuse compartment. Forward of the fuse compartment there was already a handy hole through the firewall, presumably used for some gear that was removed when the truck was decomissioned. Once in the engine compartment, it was a straight and easy shot to the battery, which is on the driver's side. I did have to add in a couple feet of power cable — what can I say, she's a big truck. I protected all of the power cable with some split loom. This really dressed up the portion that was exposed over the transmission hump.

I've found in the past that it can be a bit of a hassle to add accessories to a GM style side-post battery. Whoever had set this truck up had a lot of accessories to add and has taught me a handy solution: they used a pair of bolts in the battery terminals. The bolts are longer than needed and each is prepared with a nut which is used to jam the ring terminals down against the battery terminal. In this way, they easily adjust as terminals are added or removed. I terminated the supplied power cable with 3/8" ring terminals to match the bolts and hooked it up. 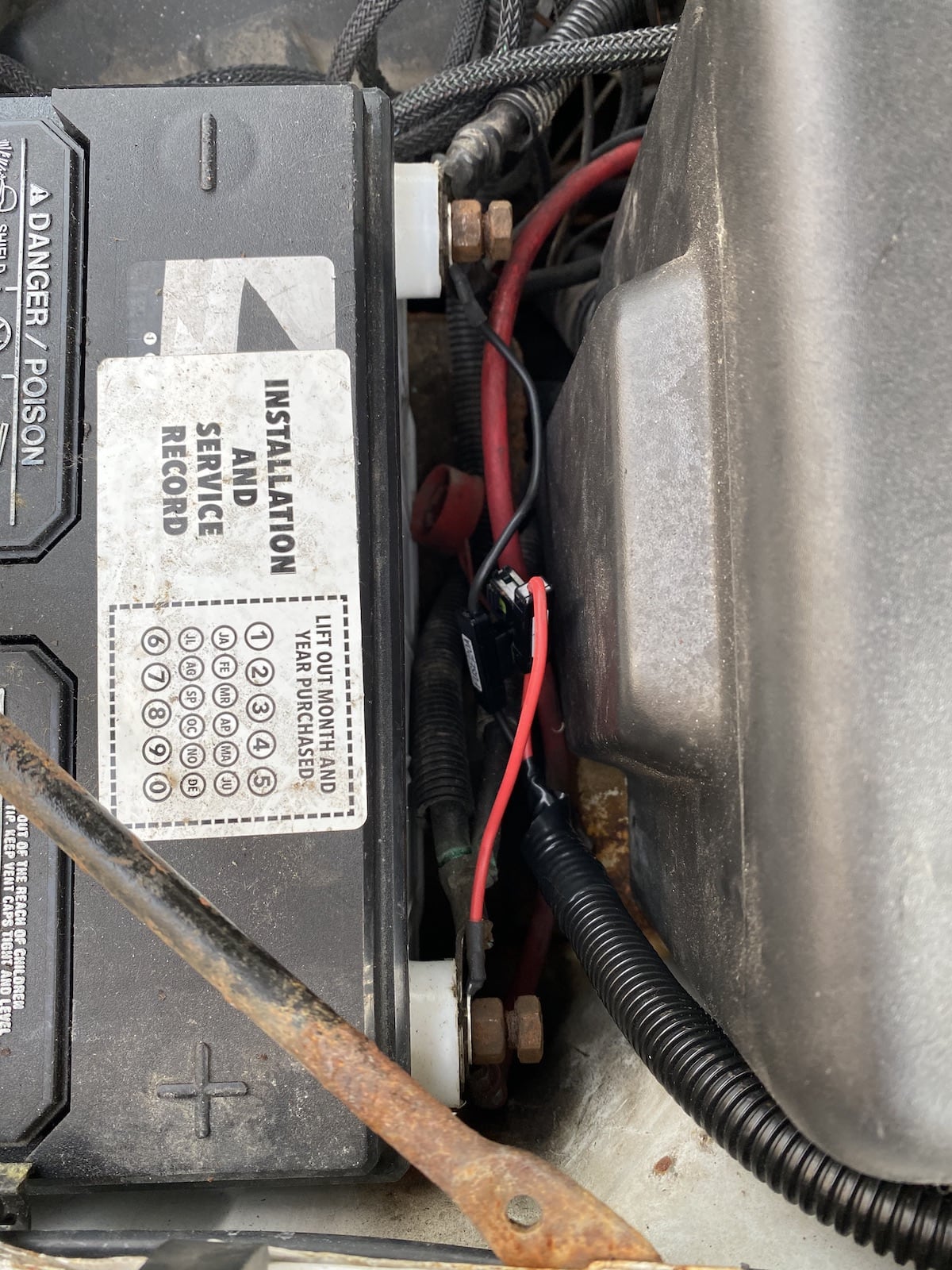 Programming the radio with some local repeaters was straightforward enough. I was favorably impressed with the performance of the transceiver and antenna in some quick tests and I'm looking forward to using it more in the coming months.

I hope you found this interesting or helpful. If this is the kind of thing you're into, you may enjoy my other articles. If you have questions or comments, please feel free to drop me a line at the address below.